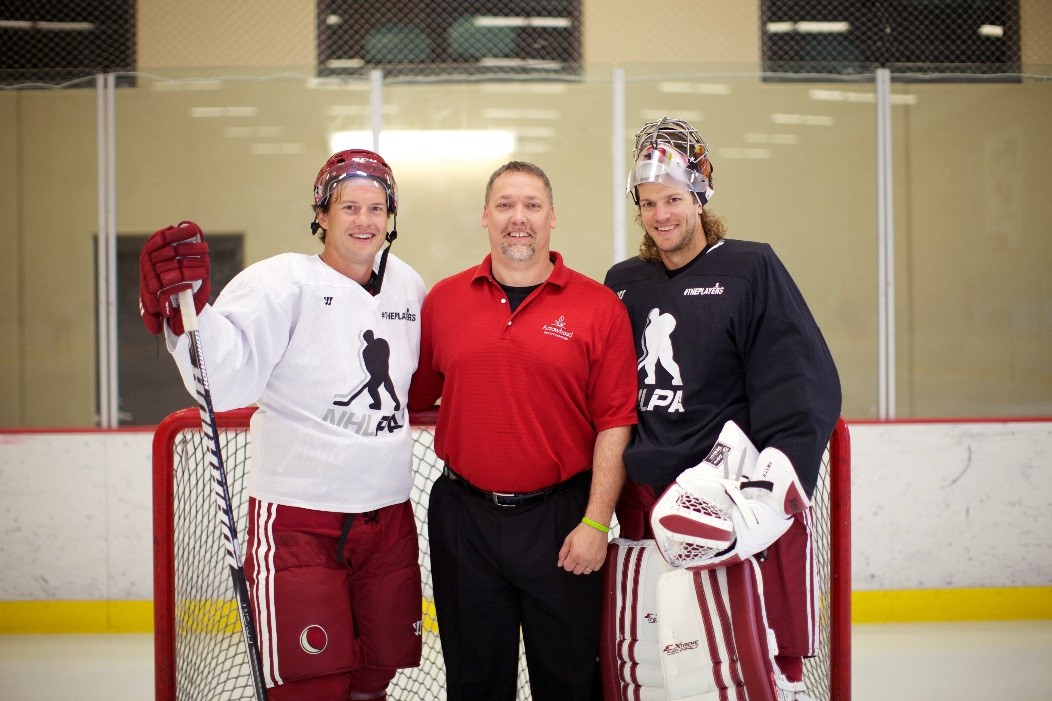 Even if you’re not a diehard fan of the coolest game on earth, it’s easy to be wowed by Shane “Doaner” Doan and Mike “Smitty” Smith’s impressive list of career achievements.  Their combined accomplishments (just to name a few) include playing in the 2006 Winter Olympics, participating in multiple NHL All-Star Games, earning a combined 5 gold and silver medals at the IIHF World Championships, and the NHL record for most saves in a regulation shutout victory. In 2011, the Arizona (then Phoenix) Coyotes brought home their first Pacific Division title in the history of the team under the leadership of Shane and Mike. Hockey may be a game, but these guys don’t play around.  That goes for off of the ice, too.  Even when Smitty and Doaner aren’t clad in NHL jerseys, they’re doing some serious work.  The hazard of hockey pucks speeding across the ice at over 100 miles per hour and jarring hits from 200+ pound men wearing razor-sharp skates often result in broken bones, lacerations, concussions, dislocated joints, split fingernails and more – and that’s all in a day’s work.   Hockey can be incredibly taxing, so it’s important for Shane, Mike and their NHL colleagues to stay on top of physical rehabilitation before their livelihoods are put at risk. Behind Every Strong Team is Another Strong Team Medical experts like chiropractors, family practice doctors, physical rehabilitation therapists, acupressurists, massage therapists and trainers are just a few types of health mavens who band together to look out for Arizona Coyotes players like Mike Smith, Shane Doan and the rest of their teammates. “My team off the ice keeps me in the best physical shape possible,” says Mike Smith.  “I”ve had my fair share of injuries and I want to have a healthy life after hockey, so it’s important that I take care of myself now.” Shane Doan agrees.  “I think every hockey player worries about experiencing pain.  My right shoulder and knee have been through a lot, so it’s important to have different people working with me so I can stay in shape and do my job.” Putting Healthcare on the Power Play How, exactly, do chiropractors and other health care specialists keep star players in tip-top shape? “We work together as a team,” says Dr. Chuck Clark, who doubles as the team’s go-to chiropractic specialist and lead rehabilitation expert at Arrowhead Health Centers in Scottsdale. “Professional athletes push their bodies to the limit every day, so it takes a whole team of health pros to keep them on top of their game.” “A team happens when people come together and gel as a group to accomplish something they set out to do,” says Mike.  “They’re a support system, a family.  The same idea applies to health.  One person can’t do it all.  You need different people, hands and eyes to help.” “Everyone wants to feel like they’re part of something bigger than themselves,” says Shane.  “That’s where being part of a team comes in.  You have to have a well-rounded group with different talents working together.  That’s important for any team – not just when it comes to hockey.”  Dr. Clark recognizes that without teamwork, it’s difficult to properly treat patients. “Sometimes it takes more than one kind of rehabilitation treatment to help players like Mike and Shane overcome pain from their hockey battle wounds,” says Dr. Clark, “so working together and having an open line of communication is the only way to support these guys and make sure they’re getting the care they need.” Dr. Clark and the team’s other physical medicine experts use methods like massage therapy, acupressure, chiropractic and additional rehabilitation treatments to adjust key muscles and bones that allow the players to do their jobs on the ice.  These techniques assure that their bodies are in perfect alignment to increase function, balance, agility and overall performance. “I’m a huge believer in chiropractic,” says Mike.  “Having the best alignment limits my chances of being injured.  And as a goaltender, I really appreciate that.  Even during the off season, I’m constantly working with my rehab team.  They help me get stronger and better for the upcoming year.” Use Team Healthcare like the Pros Does that mean specialty healthcare administered by a team of experts is only used by the pros?  “Absolutely not,” says Dr. Clark.  “You don’t have to be an athlete to need the same rehabilitation techniques the pros use.  You may not need them as often as Shane and Mike do, but keeping your body aligned and using a team to do just that is something everyone should do.”