Common Summer Illnesses In Hot Climates Such As Phoenix

May 19, 2017 By Arrowhead Health Filed Under: Allergies 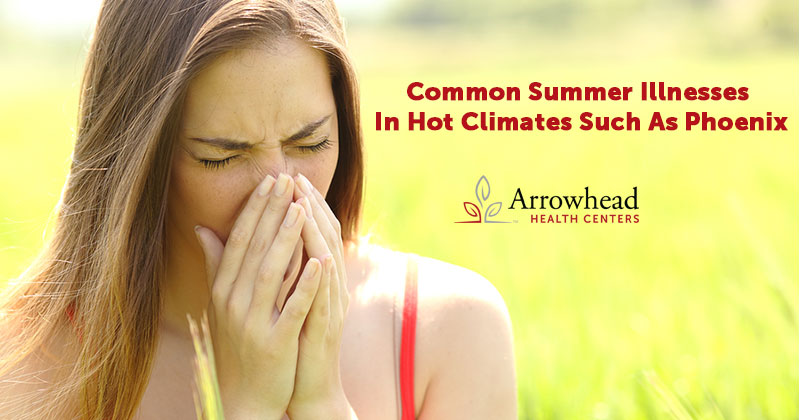 We generally think winter gets us more illness as we tend to get cold and flu during winters. But there are many summer illnesses that occur during warmer months that are quite common. In this article, we will talk about some common summer illnesses, how you can tackle them yourself and when you should seek medical treatment. Here is a list of five major heat-related illnesses that you should be aware of. Each one is serious to some extent; however one among them is life-threatening. 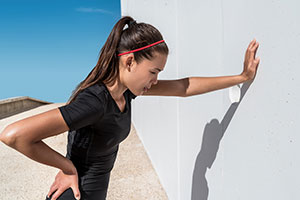 Heat cramps can be among the first indicators that bodies are at risk of overheating. It is believed that profuse sweating along with the loss of water and electrolyte intake results in fits making it really uncomfortable to carry on exercising. It ought to be noted that getting heat cramps doesn’t necessarily predispose you to any other heat-related diseases, though the muscle spasms and cramps associated with heat cramps are more common in warm summer months when you are more likely to be dehydrated. Remedies for heat cramps include stretching the muscles, massage and icing your muscles. It’s also wise to make certain to hydrate yourself, and also have some sodium drinks – a sports drink, for example, Gatorade will assist you to reduce further cramping.

On the spectrum of common summer illnesses related to overheating, heat exhaustion is in the middle of the spectrum – more serious than heat cramps, but not as concerning as heat stroke. It typically begins once the core body’s temperature ranges from 98.6 degrees to 104 degrees. A few of the signs and symptoms of exhaustion are rapid heart rate, heavy sweating or cold and sticky skin. To deal with heat exhaustion, a mild situation requires nothing more than moving to a cooler place, resting and hydrating with drinks that contain sodium (for example, sports drinks). In severe cases, medical attention may be necessary so that fluids might be given intravenously and ice packs can be utilized for rapid cooling of the body. If your body temperature reaches 104 degrees or higher, or if symptoms do not improve within an hour of resting in a cool place, seek medical treatment immediately.

There are two kinds of heat strokes, classic and exertional. They are responsible for 400 deaths each year. 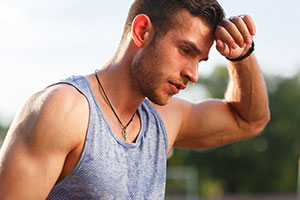 The very first type, the classic one is where the atmosphere takes a huge role, like a particularly bad summertime heat wave. These cases are typical one in the seniors who might not have functioning air conditioning at home. The second type, exertional is the one which runners and athletes should really be cautious about. This is when heat is generated through the athlete’s body from their aggressive workout. Exertional heat stroke is said to be the third leading reason for death among athletes, with football players seeing the biggest number of individual deaths every year. In both the cases, the signs and symptoms are similar to heat exhaustion with the addition of collapse and unconsciousness. Heat stroke, whichever kind, is a medical emergency and should be addressed immediately.

Miliaria Rubra generally referred to as a heat rash, is itchy, and sometimes a painful rash characterized by small red bumps that appear onto the skin when you stay in heat for too long. You will generally find this in highly sweaty areas like the trunk, waist, or groin. It is because obstruction from the sweat ducts. Excessive scratching may cause Staphylococcus infection too. To deal with heat rash, cooling of those parts is the best option. If the rash does not go away by itself in a few days, then you should consult a licensed medical practitioner who can assess the situation and suggest or prescribe creams or treatments to deal with this and any accompanying summer illnesses as appropriate.

Another mild heat illness common among summer illnesses, heat syncope is caused again by pooling of blood within the extremities, along with an immediate change in body position – for example standing up after bicycling in the warm weather. The immediately noticeable side effects are faintness, nausea, and a headache. The most typical fix for heat syncope would be to place the patient right into a supine position in a cool place. Leg elevation might help but is frequently not essential. You should also make certain you are taking in fluids both to treat and prevent this summer illness. As with heat exhaustion, you will need to seek out medical treatment if symptoms do not subside with at-home treatment. We hope that this article has been helpful in making you mindful of some of the common summer illnesses you may encounter in the coming months. Stay hydrated! Stay healthy! And if you have any concerns about any other summer illnesses or would like some personalized advice to keep you and your family healthy this summer, be sure to ask us about it at your next appointment.