Knowing how to recognize skin cancer symptoms early on is an incredibly useful skill to have when living in Arizona. While there are many benefits to residing in the Valley of the Sun, being exposed to constant UV rays can easily cause cancer to form in your skin. The key to catching signs of skin cancer depend upon many factors. No matter your age, a yearly doctor visit proves it’s crucial to pay attention to bodily changes such as a mole or freckle formations, discoloration, itchiness, or irritation. If you’re unfamiliar with different types of skin cancer and how to identify them, here are common indications and misconceptions about skin cancer symptoms:

How Can You Tell If a Mole Is Cancerous?

One misunderstanding that people have about skin cancer is whether or not moles are cancerous. The truth is, moles are generally not dangerous; they are typically a benign growth of cells that give your skin color and can change color or extrusion over time. However, a small percentage of moles can become cancerous and develop melanoma over time. Signs of cancerous moles can be recognized by the ABCDE’s of melanoma:

Can You Cure Melanoma?

What you should know about melanoma is that it is the least common form of cancer, but is also, in fact, the most deadly. When including all ages, it is the 5th and 6th most common cancer for men and women respectively. However, for women and men between the ages of 20 to 39, it is the third and second most common cancer to have. And if caught early on, the survival rate for melanoma is an astounding 98 percent. Unfortunately, melanoma may develop no matter how wary you are of protecting your skin from the sun. But is melanoma curable? The truth is that the difficulty of this matter 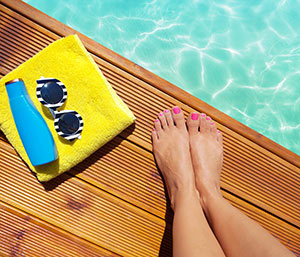 depends upon the stage of melanoma. The easiest form of melanoma to cure is that of stage zero because it has not grown deeper than the top layer of skin and can be surgically removed before it spreads any further. Both stage one and two melanoma can be removed by the previously mentioned wide excision surgery, but a sentinel lymph node biopsy is also recommended to determine whether the cancer cells have spread to your lymph nodes or not. If cancer is found in your sentinel nodes, you will need lymph node dissection to remove the tumor. By stage three, it’s nearly guaranteed that the cancer has already reached your lymph nodes and while the previous surgeries may work in removing the tumor, radiation therapy, vaccine injections, and creams may be required to fully terminate the cancer cells or in-transit tumors. Finally, stage four melanoma cancer is sadly the hardest of all melanoma to cure. Recommended treatments include surgery, radiation, targeted therapy, chemotherapy, or immunotherapy. By this point, if any stage of the melanoma is recurrent, further surgery, treatments, and therapies will have to be taken to ensure that it does not regrow again.

Other Types of Skin Cancer

Aside from melanoma, there are various other types of skin cancer symptoms you should keep an eye out for. The most common type of skin cancer is Basal cell carcinoma (BCC), which looks like a raised pink patch or pearly bump on your skin. They tend to develop on the head, neck, or arms. A clear symptom of this skin cancer is often crusted or itchy flesh, but it rarely causes pain. The second most common type is called Squamous cell carcinoma (SCC) and can be described as a firm red bump, a scaly patch, or a sore that won’t completely heal. These are likely to be found on the rim of your ears, face, arms, chest, neck, and back. Lastly, Actinic Keratosis (AK) is another form of precancerous growths that are dry, scaly patches or spots. AK generally appears after the age of 40 because it takes years of sun exposure for them to develop. This skin cancer also forms on the head, neck, hands, and forearms like BCC.

Steps You Can Take to Prevent Skin Cancer

The best way to prevent these deadly side effects of the sun is to check your body for skin cancer symptoms as often as possible. People of all ages, genders, and skin tones are susceptible to developing skin cancer due to any exposure to sunlight. Catching symptoms early on will heighten your chances of treating it before the cancer cells spread and become more difficult to surgically remove. You can rest assured knowing that your skin is being taken care of by following a few simple methods: wear lots of broad spectrum sunscreen, avoid tanning and UV tanning beds, and see your primary care physician every 6 months to a year. Arrowhead Health Center offers many medical programs and services, including skin cancer screening and treatment. Learn how to enjoy your summer without sacrificing your time in the sun by scheduling an appointment with one of our trusted primary care providers at (623) 334-4000.